A Victorian Terrace In Hackney Gets An Eclectic Makeover

This Victorian terrace in East London was in poor condition aesthetically when it was bought by its current owners in 2008. They were attracted by its central location and quirky, three-storey layout, and saw plenty of potential in spite of its shabby appearance. ‘It hadn’t really been touched for 30 years,’ recalls interior designer Inga Kopala. ‘It looked very unloved when I was first asked to help.’

Having used most of their resources purchasing the property, the owners adopted a gradual approach to the renovation, beginning with the kitchen and dining area in the basement, before moving on to the bathroom and bedrooms on the top floor, and finally the living room on the ground floor. As the house was habitable – albeit not yet in its final form – the owners lived there throughout the refit, which took around four years to complete, with pauses in between.

‘We finally finished in 2012,’ says Inga. ‘The owners have a very good eye for design and had already amassed a large collection of accessories and artwork they wanted to incorporate. Essentially, they wanted me to create a backdrop against which they could display everything to best effect.’

The eclectic scheme features shots of vibrant colour, which sit alongside a masterful blend of high street and designer furnishings, as well as original Victorian features – such as the cornice and fireplaces – that reference the property’s rich heritage. 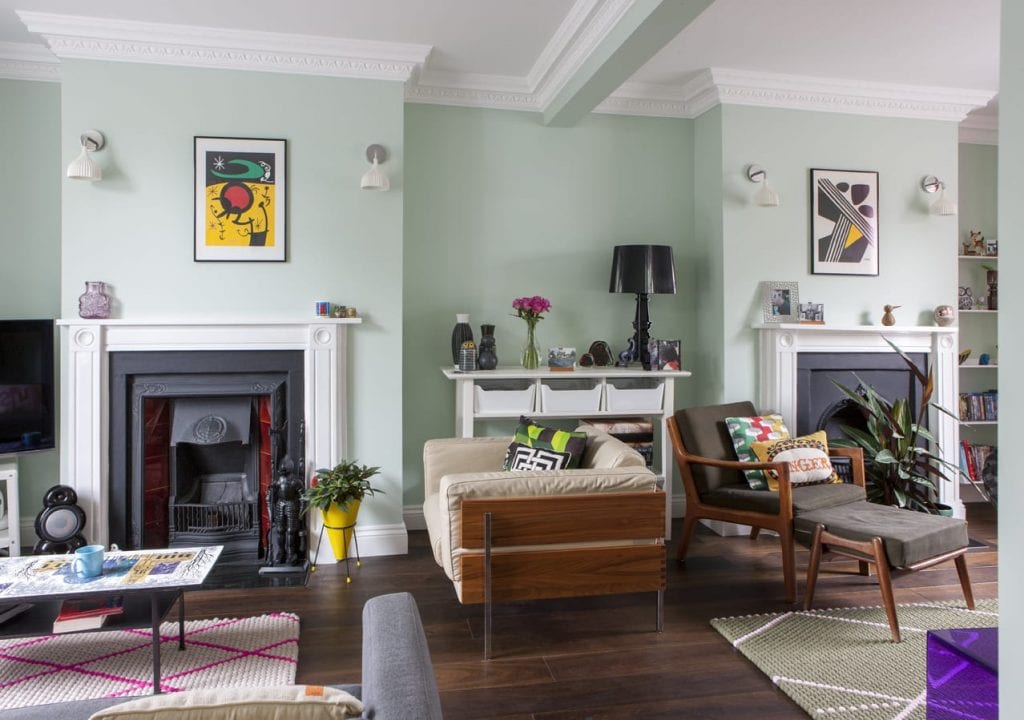 The front door of the house opens onto a bright, open-plan living area furnished with a mix of modern and classic pieces. The restored cornicing and two original fireplaces emphasise the property’s Victorian heritage, and are highlighted by pale green walls.

‘The owners do a lot of entertaining, so it was important to make this a welcoming space – the green walls are very soothing,’ says Inga. ‘I chose the dark-stained walnut floor to add depth to the scheme. Everything sits very well on it. I find darker floors are generally more versatile, particularly with colourful walls,’ she explains. 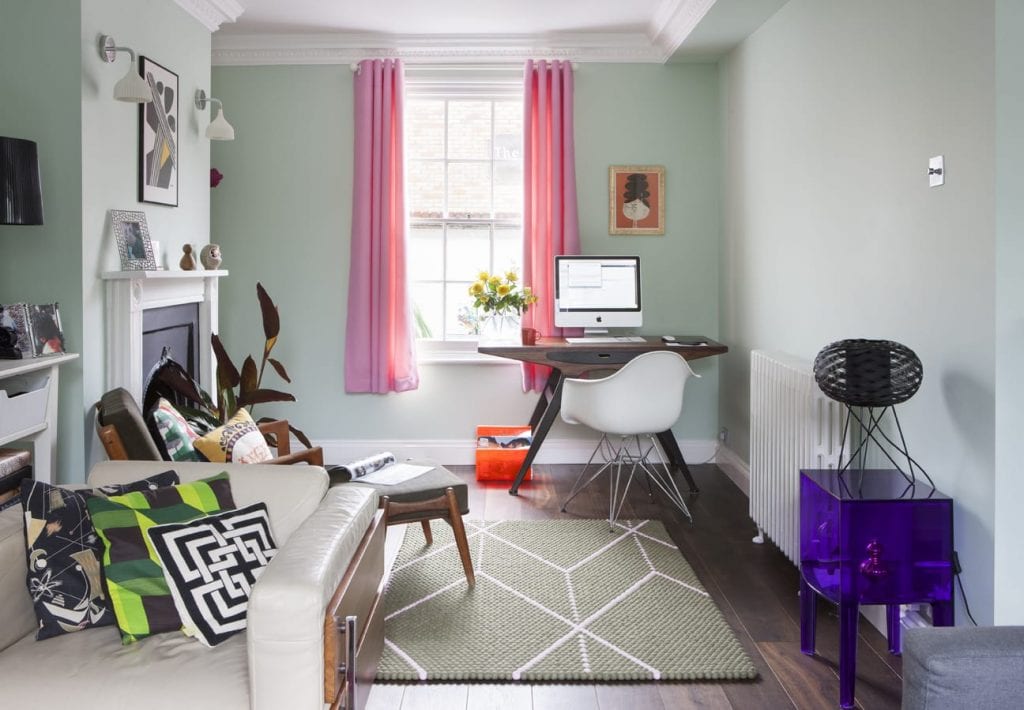 Much of the cornicing was in such poor condition that it had to be replaced. ‘We restored it where we could, but otherwise, it was a case of carefully matching it to retain a sense of authenticity,’ explains Inga.

Matt black paint around the restored fireplaces adds a contemporary twist, which Inga has picked up in the choice of furniture and accessories. ‘It’s a very livable home, and while the owners did splurge on a few items, they were happy to mix it up with some clever high street finds, such as the Habitat armchair,’ she says.

Artwork and accessories dotted around the room have been collected by the couple over a number of years. ‘They have a lot of things,’ says Inga. ‘I provided them with a blank canvas, which they’ve filled with their treasured possessions.’ 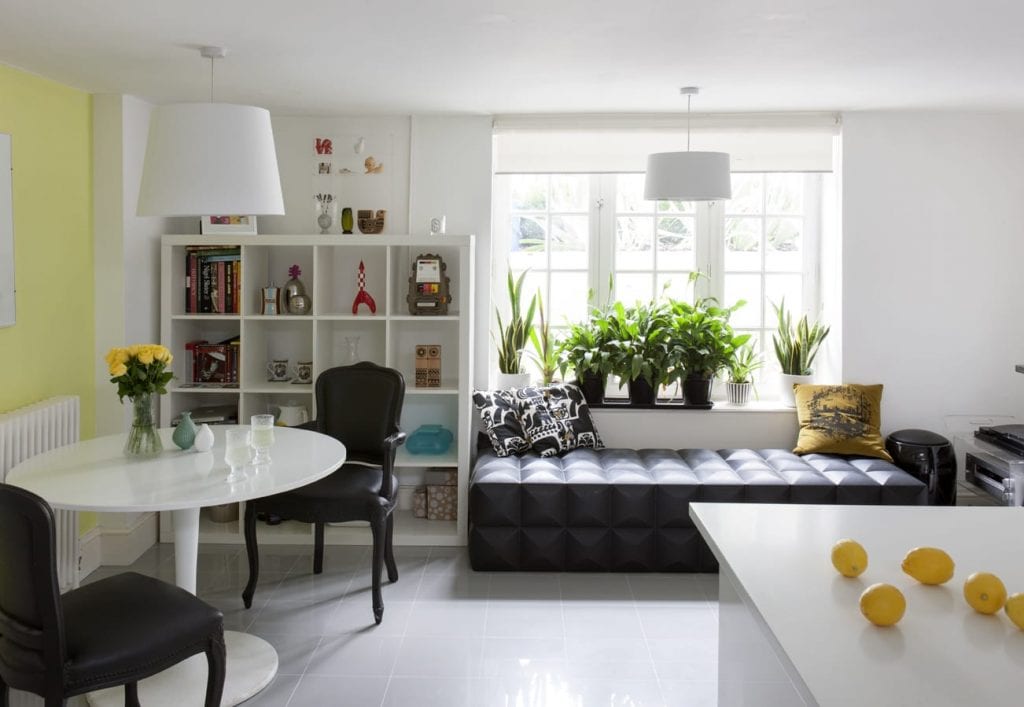 At the other end of the living area, a small work station serves as the couple’s stylish home office. ‘It’s not an enormous house, so we had to be clever with the available space,’ says Inga. ‘For this couple, the devil was in the detail – they have a lot of trinkets, but we made sure the scheme wouldn’t feel crowded. I think we’ve succeeded in keeping it very balanced.’

Cheerful pink curtains were chosen by the couple, reflecting their playful personalities. 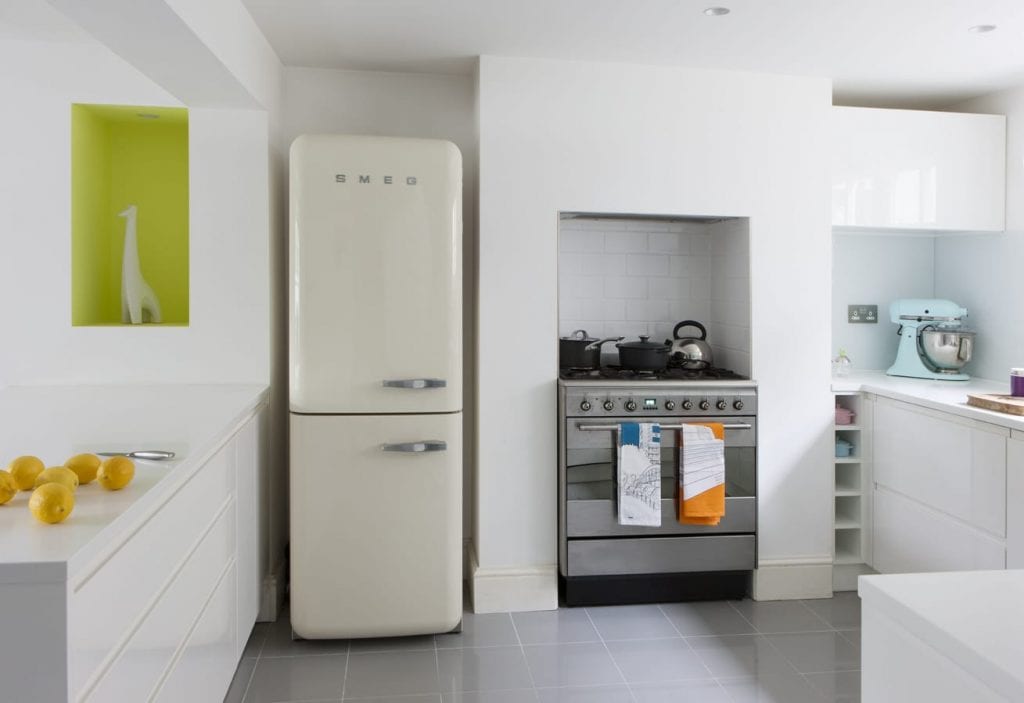 The kitchen has been kept neutral and is accessorised with retro appliances and a white Smeg fridge-freezer. ‘It’s a basement space, so to avoid it seeming dark, we kept it very simple, with high-gloss white units and worktops,’ says Inga. ‘The colourful recess [on the left] was the one spot where we went a bit crazy, just to break up the white space a little.’ 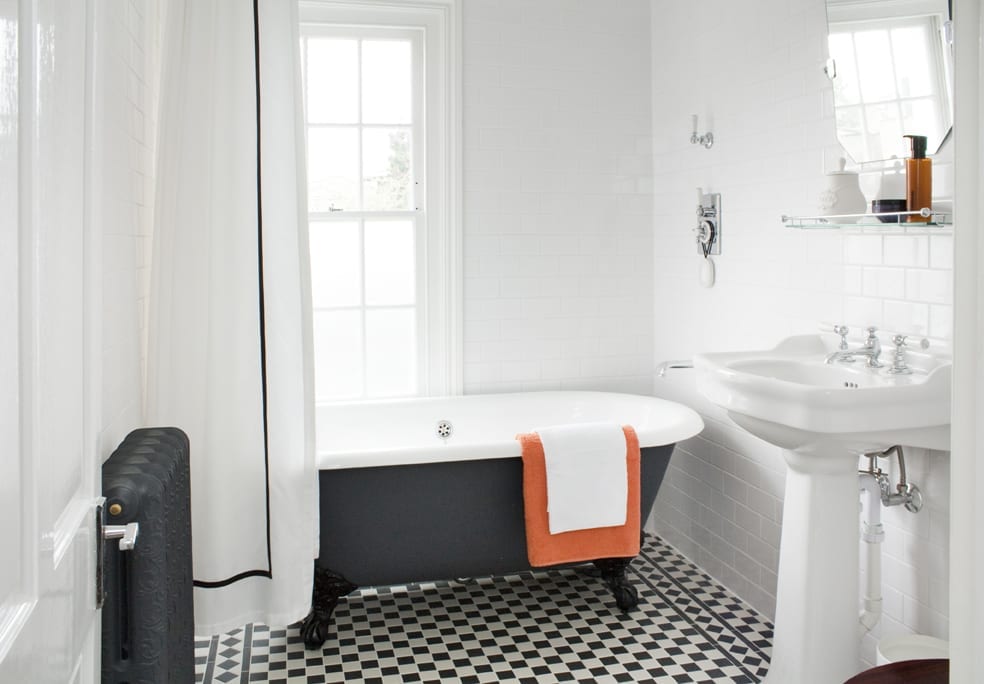 The owners wanted to reference their home’s Victorian heritage in the bathroom, so Inga opted for a classic monochrome scheme with replica fixtures and fittings. ‘The tiles are a classic Victorian design, but the white metro tiles and matt black on the bath and radiator give the room a contemporary twist,’ she explains.

Bath, from the 1900 Classic range; basin unit, from the 1910 La Chapelle range; both Lefroy Brooks. 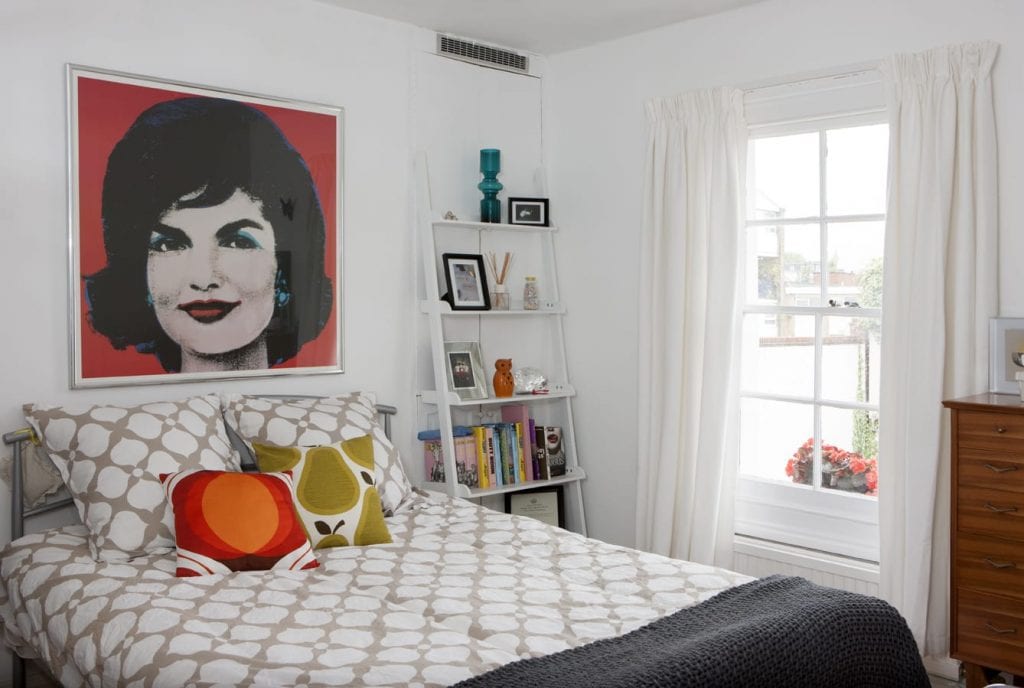 The couple’s prized Andy Warhol print was the starting point for the master bedroom scheme. ‘They really love his work, so the bedroom is all about this picture,’ explains Inga. ‘We kept the rest of the room very simple to allow the picture to take centre stage.’

A shelf unit is filled with a collection of treasured photographs and ornaments in the otherwise pared-back room. The chest of drawers was found by the couple in a local junk shop. ‘The bedroom is a relaxing space and it’s very personal to them,’ says Inga. 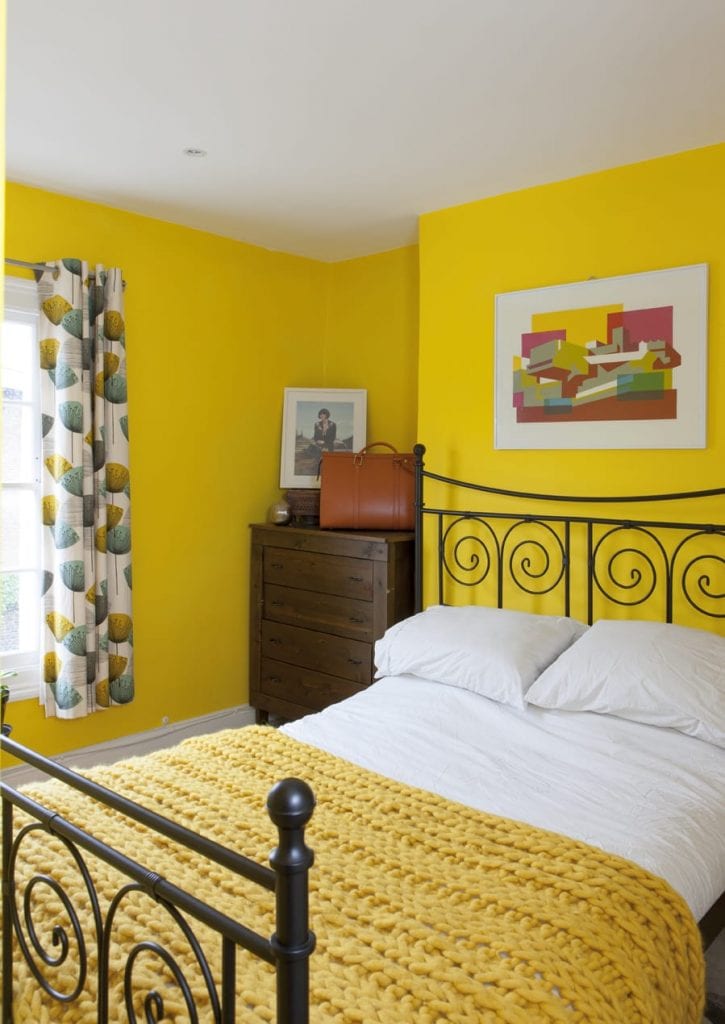 The guest bedroom is painted in a dazzling yellow. ‘They don’t spend much time in here, so they felt they could go a little bit more crazy in the guest bedroom – hence the bright colour,’ explains Inga. A chunky knit throw keeps the scheme feeling cosy and welcoming.

Back to inspired lifestyle & interiors articles

A Victorian Terrace In Hackney Gets An Eclectic Makeover